This site or third-party tools used by this make use of cookies necessary for the operation and useful for the purposes described in the cookie policy. By closing this banner, scrolling this page, clicking on a link or continuing navigation in any other way, you consent to the use of cookies. Click here for more info or Deny your consent

5% OFF On your first order use this coupon: WELCOMEUK (only for registered users)

Cyber Monday is Here, 10% discount on your next order with coupon: CYBER18

The snowblower helps you solve all the problems related to snow falling in front of your house, on the sidewalks, in the driveway quickly and effectively! From today no more shovel and fatigue, but only technology and innovation.

Our catalogue offers a good number of items with different properties that will surely satisfy your needs. Light electric snowblowers, easy to operate, with battery or connected to the home network; combustion engine snowblowers, powerful, versatile, suitable wherever you need them in absolute autonomy; tracked snowblowers to clean sloping areas with more excellent grip.

The snowblowers with an internal combustion engine are the most powerful ones, equipped with specific equipment and components made of high-quality materials, able to move large amounts of snow or ice after a heavy snowfall! 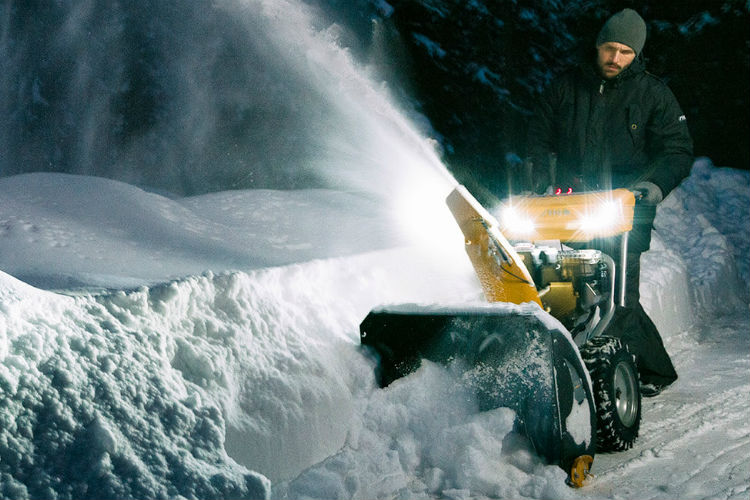 Snowblower: Never get stuck in your home again

The snowblower, as everyone knows, is a vehicle equipped to remove snow usually from roads or railroad lines. Still, when it starts snowing, there is no distinction between the common roads where vehicles drive on and our front porch and driveway. How many times have you been late for work or an appointment because you opened the door and found everything snowed? A common shovel in these cases is not enough, and the snowblower is the solution for you, especially if you live in areas subject to heavy snowfall ... The snowblower allows you to free even very large spaces in a few minutes and without effort!

Electric snowblower is powered by electricity. The fundamental difference between models is the amount of snow they can move; influenced by the power of the motor but also by the size of the blade. The more compact models are ideal for small to medium sized areas, while the more massive models are suitable for cleaning up large car parks and other large outdoor areas. The main advantage of the electric motor lies in its quietness, and this feature is especially crucial because snowblowers are generally used in emergencies during the night or early morning hours to make the entrances to houses accessible.

The electric snowblower is everything a lover of tradition and comfort would appreciate. On our website, the Keyma MSTKE120033 by Brumar electric snowblower, not surprisingly, is among the best-selling products because its use is intuitive and straightforward and being light, small and compact, it is suitable for any occasion. Just connect it to the mains and press the start button...The sensation will be that of using a traditional shovel with a modern touch that will make your work easier and faster, so much so that you won't believe it!

The petrol snowblower is essential in case of heavy snowfall because many of you will know the inconvenience that this can create, making even the most important roads inaccessible. With a quality internal combustion engine and the right displacement, the snowblower can clear entire paths in a very short time, restoring order to the surrounding area. The advantage of the internal combustion engine snowblower is that it is a highly powerful tool accessible to everyone. Contrary to what you might think, its use is intuitive and straightforward, and it can be used both in the private and professional field also because you can be sure that our Loncin engine will never disappoint you in any case!

The cordless snow blower is the right compromise between respect for the environment (if you buy rechargeable batteries) and freedom of movement. In fact, although this feature is also guaranteed by the internal combustion engine, this does not always reflect your needs, especially if the area you need to treat is quite small. If you don't want to be restricted by an electric cable and at the same time don't have such essential needs, you'll love the battery-powered snow blower! Battery-powered models are more comfortable than ever to use because they're usually smaller and lighter, and the only thing you have to think about is recharging the battery at the end of the job!

The turbine snowblower is indispensable in the most challenging cases where it is necessary to clean up steeply sloping roads (e.g. ski resorts). In such cases, even the use of an electric snowblower may prove inadequate to deal with emergencies. The turbine model was created for this very reason, because being equipped with a more powerful engine, it can withstand more heavy snow loads in total safety. Although it may seem strange at first, its stability and efficiency are combined with surprisingly simple use!

The prices of the snowblower vary according to the models and the type of feeding, and although it is a solid and robust machine because its job is to lift a certain amount of snow, its price is super competitive. As usual, it is clear that the more functionality a snowblower has, the higher the price will be, but on Lineonline you will also find models starting from only 70 euros! Take the opportunity and make a smart purchase, which in the future will prove to be one of the most significant investments you have ever made and when it starts snowing outside, you will finally be able to enjoy only the beauty of the snow.

The AS 56 P petrol snowblower is one of the top models of the famous Alpina brand and that's why we decided to mention it. Equipped with a two-stage GGP SM70 212 petrol engine and 5 forward and 2 reverse gears, the AS 56 P can be driven comfortably and with a complete view of the work area and since we talked about the importance of blades before... This model has particularly hard and resistant serrated steel cutters and for safety, this model, having large rubber wheels, has very few rivals.